New Delhi: The government on Friday (May 8) decided to put Shri Ram Janambhoomi Teerth Kshetra Trust under section 80G of the Income-tax Act, and issued a notification in this regard. With this decision, donations made to the trust have been exempted under the said provisions of the income tax for the financial year 2020-21.

The Central Board of Direct Taxes (CBDT) has allowed tax exemption to donations under Section 80 G of the Income Tax Act to the trust on the grounds that the structure would be a “place of historic importance and a place of public worship”. 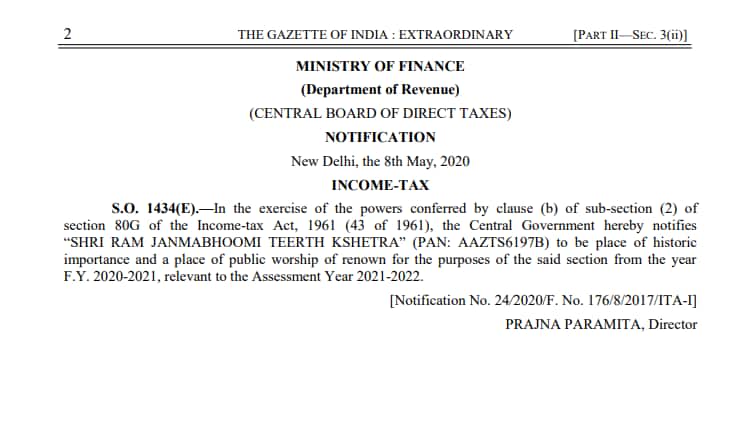 Notably, the tax break under Section 80G allows amounts donated to be deducted from the taxable income, but there are certain conditions and restrictions in claiming the tax break.

The Shri Ram Janambhoomi Teerth Kshetra Trust has been created for the construction of the Ram temple in Ayodhya. The 15-member trust was constituted by the Modi government, after the Supreme Court’s verdict on November 9 settled the Ram Janmabhoomi-Babri Masjid case.

Earlier on April 8, the Trust also released its official logo on the occasion of Hanuman Jayanti in Ayodhya without any fanfare. The logo has a photograph of the sun with a photograph of Lord Ram encircled with the logo in Sanskrit language stating “Ramo vigrahavan dharmah” (Lord Rama is the embodiment of religion).

Lord Hanuman also finds a place in the logo which is in red, yellow and saffron.